An employee was awarded over £28,000 after it was found that he was unfairly dismissed over social media comments. The judge concluded that there was no evidence that would have supported a reasonable employer in finding that the employee was engaging in a ‘prohibited discussion’ under the company social media policy. There were also a number of serious errors in how the disciplinary process was handled, including a lack of investigation.

The case of Austin v A1M Retro Classics Ltd highlights the importance of employers acting reasonably in relation to online conduct, just as they would do in any other case of misconduct, and ensuring that where disciplinary action is justified, that the matter is handled appropriately.

That evening the employee went home and put a comment on Facebook, “I don’t think I’m a bad person but I don’t think I have ever felt so low in my life after my boss’s comments today.” A number of people made comments on the posting – some were aimed at trying to reassure the employee, others were inappropriate including some homophobic comments and one which said the employee should punch the Managing Director in the face as it would help him feel better.

The Managing Director became aware of the Facebook posts and carried out a ‘minimal investigation’, getting help from the manager to download the comments. The Managing Director did not use Facebook himself or understand it. The employee was called into a meeting to ‘discuss his use of social media’ however, unbeknown to the employee, this was actually a disciplinary hearing. Following this the employee was dismissed for gross misconduct for breaching the social media policy, the dismissal letter referred to potential breach of equality legislation as well as  damage to the business. After an unsuccessful appeal, the employee complained to the employment tribunal that his dismissal was unfair.

The judge agreed that the employee had been unfairly dismissed due to a number of points, including: 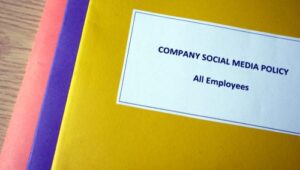 The employee was awarded £28,560. This included a 20% uplift on the compensatory award due to the employer’s unreasonable failure to follow the ACAS Code of Practice on Disciplinaries.

Whilst dealing with matters involving social media can be particularly stressful for employers it’s important to keep things in perspective and to act reasonably. If an employee makes an inappropriate posting of some kind that impacts your business, their role or that employee in the workplace, remember that online misconduct should be treated in the same way as ‘off-line’ misconduct. The starting point for dealing with the matter in most cases will be to carry out a thorough investigation to determine what action, if any, is appropriate in the circumstances.

If it is appropriate to take disciplinary action, remember that a proper process should be followed. In outline, this will involve formally inviting the employee to attend a disciplinary meeting (with sufficient notice) and including copies of the evidence, holding the meeting, giving the employee a written outcome and right of appeal.

It’s important to seek advice on the facts of your case before taking any action. Remember Kingfisher Professional Services Ltd is here to help, we can provide practical guidance on investigations and throughout a disciplinary process as well as assisting with matters such as drafting disciplinary invitations.

If you have a disciplinary or other employment law matter you would like assistance with, please do not hesitate to contact us.